I’ll admit, I still have kind of a hard time knowing who has the ball and what’s happening next on the football field at Tucker’s games.  Keeping score takes my full attention, which – let’s be honest – is usually divided by the younger of my two distractions, so when they throw in some penalties and flags on the play, I just really don’t know what’s happening.

Mostly, I just watch the boy who got his jawline from his dad, throws the ball like his dad, paces the sidelines like his dad, and loves the game like his dad.  I take my cues from him, I keep him hydrated and snacked, I stay off the field when he looks perhaps injured, and together we do okay.

So when both teams erupted with cheers, parents jumped to their feet, and the sidelines roared, I was pretty sure I’d missed something.  It looked like a normal play, albeit a winning one, but judging by the crowd’s response, I thought maybe someone had just won the third grade version of the SuperBowl.  I mean, the place was a bustle of high-fives and smiles, even some tears. 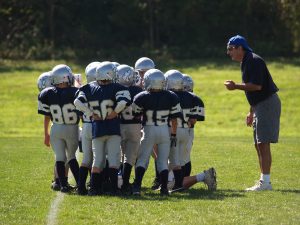 It turns out, there is a boy on the opposing team with special needs.  Their coach came to our coach and asked if we could please let him score, since we are nearing the end of the season and every boy should get to touch the ball in a significant way.  And so, our team of nine-year-old champions gave away a touchdown.


When the boy got the ball, they each chased him toward the end zone and fell to the ground on purpose when they pretended to pull his flag.  He sailed into the endzone, the refs threw up their arms to declare the win, and we had on our very own field the climactic scene from the movie Rudy.

It was unspeakably beautiful.

In the post-game huddle, Coach pulled all his guys in.  He said,

“Anytime you ever have a chance to help someone experience a real win in life, never confuse that with just the score of the game.  Do it every time.  Because in a decision like that, you’ll learn more about character and integrity than if you win every game of the season. Great job, guys.  That was an all-pro move.  Always go for the real win.”

Our coach is a maker of men.