This One Important Thing

To read this article in its entirety with PJ Parenting, click here.

I was drinking iced coffees at Starbucks with my agent, whom I love deeply and implicitly for more reasons than just the fact that he launched my career. He asked me, “Trish, how will you redeem this #BrokenFootSummer? How does a writer make the most of this?”

My answer included things like, “Well, I’m watching Tuck become even more resilient, and he’s developing a very tender, compassionate heart… and also I do think I’ll get some great writing material out of this season.”

He said, “One thing I know for sure is that this will create an indelible bond between you two. He will watch you serve him, love him, and literally wash his feet. He will see you love as Jesus loves, and he will never forget that.” 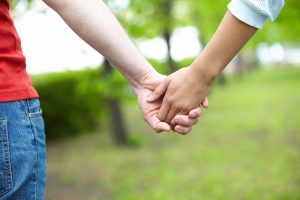 I couldn’t bask in the wisdom yet because I immediately guilty for my less than stellar moments in all of this. At the end of our days together, I don’t have much left to give. Actually, it’s more accurate to say I don’t have anything left at all.

Long about 9:30pm, I reach my limit for words, needs, requests, and especially for a child to touch me. At this same time, and you can truly set your clock by it, my big kid becomes needy and clingy, like a grown Golden Retriever who doesn’t realize he’s not a lap dog puppy anymore. Arms and legs are everywhere. These, my friends, are not my shining moments.

But Greg continued, pulling me out of my patterns of self criticism and regrets that haven’t even happened yet. He said, “Trish, when this is all over, he won’t remember the cast or the surgery or the doctors and nurses or even the pain. He will remember you. He will remember that you were here for him, with him, every day.”

I remembered the first few days of this summer, in the days before The Great Fall From The Swing Set, when freedom was ours and the weeks stretched before us with nothing but possibility (and football camps for him and writing days at Starbucks for me). Tuck’s friend was going to the pool that day, and once my boy learned that agenda, he became a machine with a single focus: Get to the pool. When we got there, which I assure you was definitely not fast enough for his liking, I watched him blend in with a crew of boys who are just enough older than him. They splashed and played, threw a ball back and forth in the in-between place connecting the deep and the shallow ends of the pool.

Suddenly, my son looked so much older than he had at the breakfast table that morning. I was writing in the sunroom when he woke up and came to me with his sleepy eyes and morning voice and bedhead. He leaned in for a hug, and as soon as he felt my arms around him, he swayed back and forth, almost imperceptibly. He came to be rocked, and he didn’t even know it.

Just hours later at the pool, I realized that we are on the brink of the in-between place connecting childhood and adolescence. I watched as he swam and splashed with these older boys who are very aware of the girls nearby. They were almost flirting, but not quite, and I know it’s only a matter of time before it all comes to Tuck in a rushing wave. Maybe it was because of the novel I’d been reading, where the single mom is grieving the end of her daughter’s childhood. Maybe it was the song Slipping Through My Fingers from MamaMia and Meryl Streep. Maybe it was all hormones. I don’t know what made it all so raw that day, but it was too much to watch. I actually had to look away because of the physical pain in my heart.

Just a few days later, our lives hit a giant Pause Button. Laid up with his broken foot, my boy and I are playing card games and reading Newberry books.


For now, the scenes at the pool are all on hold, and so are the dynamics with the girls and the testosterone.

For now, my son thinks I am exceedingly fun to be with.

And in the middle of it all, Greg reminded me of the transient beauty of it all, this opportunity to be in this with him, all day, every day.

It’s possible that someday my sons will say, “Mom, remember that summer when we all slept in the living room and we watched movies together every night? How come we never did that again?” And nobody will remember anything about a broken foot.

They will just remember the awesome.