Once upon a time, there was a curly girl and a handsome man, a cup of coffee and a diamond ring, and a million ways to say yes to one very important question.

I headed into Starbucks on Friday morning to make lattes and frappuccinos for the morning shift. Peter had casually mentioned that he might stop in to Starbucks that day, since most of his to-do list centered around phone calls and internet searching, which can be done anywhere. Little did I know how he had orchestrated everything to perfection.

I didn’t know he had a ring in his pocket and a plan in place. I didn’t know he had called Starbucks that morning to ask the shift manager to assign me to the cash register, thereby positioning me in the exact spot where I was when he met me for the very first time. I didn’t know, couldn’t know, and have now realized I don’t actually know everything in the world, and that’s a wonderful realization.

I spotted him when he got in line for a cup of coffee. I watched him let people in line in front of him. He seemed so centered, so grounded, so peaceful. He stepped up to the counter, next in line. And this sly, silver fox said to me, so evenly and with so much intention, “Trish, I came in here a few months ago, and I asked you to fill up my coffee cup. Today I would like to ask you for something more.”

And then his eyes got shiny with tears. And his mouth made an almost-frown that means he’s about to cry. And then he pulled a diamond ring out of his pocket, and he held it out to me across the counter.  And everything in the world disappeared except this man before me, on one knee. 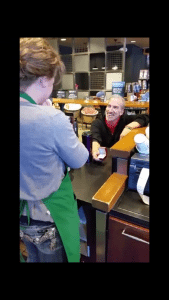 You guys, I was so overcome, so undone… I forgot to answer him. And it’s not like he didn’t know what I was going to say. I mean, we had talked about it. As we planned our future together, as we both had come to the unflinching conclusion that we want to marry one another, I had taken all the guesswork out of it for him. I mean, really, there are a few things in life a man should get to be sure of. His bride’s answer should be so crystal clear, so absolutely agreed upon, long before he takes a knee.

In our months of conversations, I had promised him, “Honey, when you ask me, I’ll say yes.”

But I was so surprised that it was happening, here and now, in this moment that had somehow surprised me though I knew he would someday ask. There he was, down on one knee, and I left him there, posed in the asking position while I stood there and cried. The poor guy just waited.

Until I said yes.
Because of course I said yes.
A million times yes.
For the rest of my life, yes. 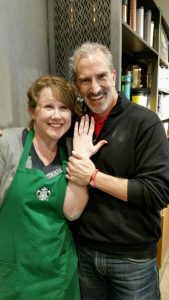 I ran from behind the counter, and I literally leapt into his arm. He swept me up off the ground, and the entire restaurant erupted in applause.  He put this gloriously perfectly-perfect gift of a ring on my finger, and everyone cheered again.  And it wasn’t until then that I remembered there was anyone else around us… or anyone else in the world. Everything else had truly fallen away for that moment.

There was only Peter and a ring and the look on his face that I want to remember for all of my days. 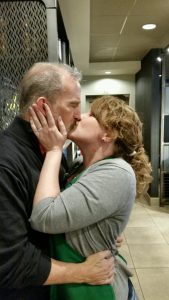 “I stepped up to the counter, and I asked for my wife.”
~ Peter