Legendary Tales from a Baseball Bride

In the revolutionary way Peter has of getting me on board with things I’ve never cared about, I am learning to be a baseball bride. The man loves the Rockies, and somehow, against all odds, he’s got me drinking the purple KoolAid.

We went to see a game last week for Peter’s birthday. He’s a real deal fan, pretty much a charter season ticket holder. I’m pretty confident that as soon as they printed season tickets, a young and eager version of my man slept overnight on the sidewalk for the possibility to get tickets. He’s upgraded a bit each year of the last million years he’s had tickets, so now his seats are eight rows away from first base. 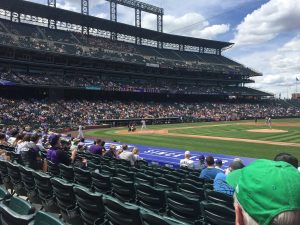 He pretty much owns Coors Field, from a relational standpoint. It’s like the whole place knows him. We had lunch at the Mountain Ranch Club overlooking the field, and the hostesses and servers were all eager to make sure Pete had the royal treatment. They know him at the concession stands. They know him at the t-shirt counters. After all, he was watching baseball games at this stadium while these ushers were still playing T-ball in the backyard. 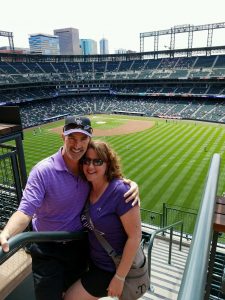 And now I get to be the cute girl in purple next to the guy who owns the place. It’s not a bad gig.

So, it was the top of the eighth inning, Colorado Rockies v. San Francisco Giants. Tomlinson took the plate. He hit a foul ball on an 84 MPH slider. (I’d like extra points right now for the knowledge I’ve attained. Please. Write down this date and how impressed you are.)

I had been given the only fair warning for sitting so close to the field: If a right-handed batter hits a foul ball, keep your eyes up because that ball is coming your way. It was a fair and accurate warning. That ball went high and wide, headed straight for me.

You guys, I can’t catch car keys. And now I was in the direct line of a foul ball from a major league hitter. I closed my eyes. I crouched and covered. Because I can’t be called upon to respond appropriately in the face of a baseball crisis.

And then I heard beside me—snap! The sound of a closed fist hitting a palm, except it wasn’t. It was a the sound of a Major League Baseball landing in Peter’s open hand. I knew he had caught it before I opened my eyes, and when I looked, he was holding the ball in the air in that winning way you do when you’re the catcher of the foul ball. 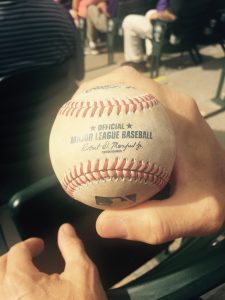 The crowd went wild around us. Fans were cheering. People were congratulating. And then ushers came to see if he needed ice, because a ball doesn’t usually land without a mitt and never leave a mark.

I felt like the high school girlfriend whose quarterback boyfriend scored the winning touchdown at the homecoming game. (Except exchange all of those metaphors for baseball and marriage analogies.) And Peter felt like the hero who stepped into the line of fire to save his bride from the ball that might have been her undoing.

Peter won the day. It was one of the coolest things I’ve ever been next to. 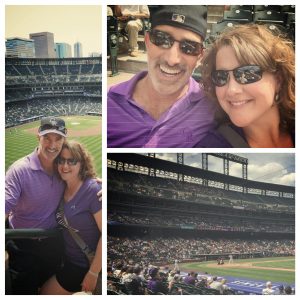