The Day Seth Godin Congratulated Me on Writing a Bestseller

Bustling through the Denver International Airport, I followed Peter into the Tattered Cover to see if they carried You Can Do This.

(It’s a joy to be married to one who champions my writings and believes, “yes, of course, we will see it in this bookstore. And every bookstore. They’re fools not to carry it! Fools, I tell you!”)

Well, they didn’t have it.

But as I stood there, awkwardly waiting for them to check and double check their catalog system for my latest work, I saw in front of me someone very familiar signing a book. With a sharpie and style of someone whose books are indeed in every bookstore.

I stage whispered, “Is that Seth Godin?”

And he turned to me, and sure enough, I’d know those trademark frames anywhere. Anyone who follows him would. That’s why it’s called his “brand.”

If you are new to his brand, Seth Godin is a brilliant thought leader, a prolific author, and a professional noticer.

Here are three things I’ve learned from his brilliance:

“I’m an author as well, actually.”

“You are? What kind of books do you write?”

Why, oh why, do I never know the answer to that question?

I said, “I write creative nonfiction.” Which doesn’t ever mean anything to anyone. I could have said, “I just released a book about confidence. It’s called You Can Do This.”

But I didn’t. I just made us all question what creative nonfiction is as a genre. I’ve got to get a better plan. But I was fan-girling and getting this photo at the time. 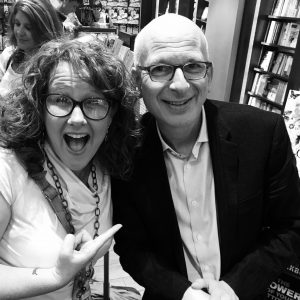 And my mind could only do so many things quickly.

And then Tyler stepped forward and said, “See? This book. She just released this one.” 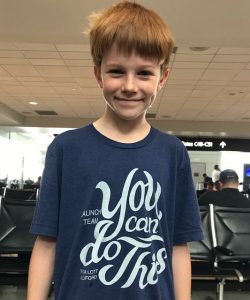 My sweet boy was wearing his launch team t-shirt. At which point our new friend Seth Godin said, “Are you on the launch team? Or the lunch team?” He folded the letters over to show Tyler the optional spelling. At which point he promptly won Tyler’s heart.

And then I added, “My third book was just released this week. It was #1 New Release on Amazon.”  Which was kind of redeeming.

Because then he lit up. Like I was speaking a language he knows.

“Well done! Three books and a bestseller?! Way to go! Right on!”

Tyler later pointed out that perhaps what he had said was, “Write on!” I like how Tyler thinks.

I think maybe it was a good day for him. The Tattered Cover carried his book, and he had a fan recognize him.

But it was kind of a good day for me. I have a new book to read. Signed by the author, even. 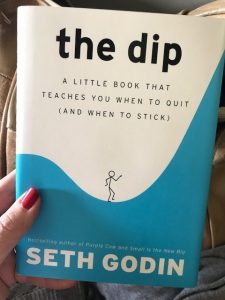