“Mom, I have nothing to read.”

“Mom, I have nothing to read.”

“Sure you do. There’s a whole bookshelf in the hallway. And three in the living room.”

“Nope. Nothing to read.”

It’s my second book. We lovingly call her “Peggy.” For any of you lovers of the musical Hamilton, you’ll understand that she’s the sad little sister of the other two beauties.

My other two books have done just fine in the world. But Peggy is more of a niche book who never found her audience. I wrote her when I didn’t know what I was doing, and second books are stereotypically not winners. To compound Peggy’s loneliness, seemingly very few people are parenting children through a season of grief and loss, and apparently even fewer want to read a memoir about it, albeit one that is sprinkled with humor and saturated with life. Even all these years later, the sales are astoundingly low. I can’t look at the charts. They’re sad. And I can’t do anything about it.

But I love Peggy. I’m proud of her. We did something important together, little Peggy and me. What do they say… something about how you can lead a horse to water but you can’t make it drink. You can write a book that holds your heart, but you can’t make people buy it. Some people love it. A whole lot of people haven’t read it. But Peggy is my beloved “middle child,” so to speak. She has a special place in my heart.

Anyway, I suggested to my son that maybe he could read it. He took a long inhale, followed by an even slower sigh. He put two fingers to his forehead, and he closed his eyes. He said, “Mom, I’m going to be real with you.” And then his eyes met mine. “I don’t like books like that.”

“Books about you, you mean?”

“Pal. It’s freaking about you.”

One year, during Right to Read Week, he was assigned to come dressed as his favorite character from a book. Quite brilliantly or lazily (the jury is still out), he came as himself. And he said, “Have you read Let’s Pretend We’re Normal? Tyler was my favorite character in that book.” I mean, he wasn’t wrong.

What is it they say… something about how the cobbler’s children have no shoes. My children delight in telling me how they dislike writing, how they have no future in it, and most recently, that they don’t care for my particular genre.

I parent for the affirmation. All the secure moms do.

(Turkey Tales is the annual half-hour read-along that parents are invited to, and it’s the precursor to the Thanksgiving feast in the cafeteria, coupled as a ploy to get me to buy things at the Scholastic Book Fair. Unabashedly, the ploy works.)

Then he added, “Last year, I had to be adopted by another kid in the class whose parents also never come to anything.”

Okay. *Never* and *anything* are perhaps unfair and inaccurate. As proof, I will come to Turkey Tales. Also, in other news, I may be slightly behind in the School-to-Parent Correspondence.

The fine print of the Turkey Tales invitation said, “Please bring a book to read with your child.” 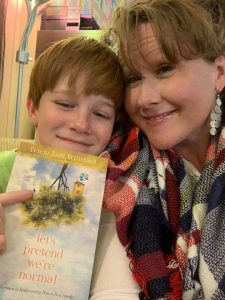 I pulled it out of my bag, and Tyler said, “I just got played.”

You sure did. Meet Peggy. Now let’s read aloud.