Probably one of my favorite people in the Bible is the persistent widow. I can’t wait to meet her. I do realize there’s a chance she’s not a real person since she was a character in one of Jesus’ stories, but still. I like her. In the parable that tells her story, we don’t get to know what injustice she was fighting for, but she would not take no for an answer. She kept showing up to the judge’s house, day after day, asking and asking. I mean, the lady straight up would not quit.

Persistent can mean dedicated, determined, patient, steadfast, and faithful. But the less flattering synonyms include bullheaded, stubborn, headstrong, and hell-bent.  I might also add crazy. It’s clear: she was not going to back down. The judge knew she would keep showing up until one of two things happened: (a) he gave her what she wanted, or (b) she died.

One version says, “For some time he refused. But finally he said to himself, ‘Even though I don’t fear God or care what people think, yet because this widow keeps bothering me, I will see that she gets justice, so that she won’t eventually come and attack me!’” I mean, come on. You have to hand it to a woman who gets results like that.

The whole point of that parable is to show the potential outcome for those with persistent faith, the answers for those who keep asking. Jesus told the story to prove that God’s motives are far better than those of an unjust judge, and he is generous to say yes when we keep asking. He invites us to pray and not lose heart.

I leaned hard into this in my own years as a persistent widow, as I began asking God for big things. I’ve told you about that journal where I have pages of names, needs, and events, and circles upon circles, that I continue bringing to God every day. Even this morning, I prayed through each one of those, drawing a new line around each question I’m still asking. He may say yes; he may say no. But if God says no, I don’t want it to be because I stopped asking. So I keep asking.

But let me be honest about the other side of that. While I feel confident in verses that call me to “pray without ceasing,”I bristle at words like, “Your faith has healed you.” Those are harder for me to hold.

I have always had a problem with the complicated theology of faith healing. And problem doesn’t feel like the right word. That conveys a need to air my grievances, to call a meeting with the people involved to discuss the matter at hand. That’s not what I mean. I don’t have any desire to debate someone’s miracle with them. When God says yes, it’s a reason to celebrate, not a reason to argue.

It’s just that when you’ve seen the actual color of death on the face of someone you love, when you’ve known the absence of their spirit in this world, and when it’s all too much too soon and it could have been avoided, it affects how you understand the stories of a God who gives and takes away.

So when I say I have a problem, it’s more like a clenching in my spirit. My Grams would call it a “stitch in your side,” that fleeting pain that I’d get in my ribs when I ran too hard as a child. The parallels are many. It’s that kind of pain, from running hard, from exertion. It doesn’t last forever, but it doesn’t sit well. It feels like a pinch in my spirit that says, “What am I to do with this? Why is God willing to heal other people? Why does he say yes to them? Why couldn’t I have that favor when I needed it most?”

I look at stories of Jesus healing people, and I wonder about their faith, how it was different from mine—or was it different at all? I wonder about Jesus’ willingness, how he makes his decisions. Look at this story Luke told:

In one of the villages, Jesus met a man with an advanced case of leprosy. When the man saw Jesus, he bowed with his face to the ground, begging to be healed. “Lord,” he said, “If you are willing, you can heal me and make me clean.” Jesus reached out and touched him. “I am willing,” he said. “Be healed!” And instantly the leprosy disappeared.

There it is again, the stitch in my side.

It’s that word willing. That’s the one I always get hung up on. I think about what I think I know about that word, the ways I use it. I picture a person with a strong will; I think of things I am willing or unwilling to do. A strong-willed child will not do what they do not want to do. And so I guess I always thought the leper was saying, “Lord, I know you can heal me, if you want to.”

But it turns out I didn’t know very much about that word willing. I thought it means “want to.” But it has a much deeper meaning, one that involves words like “purpose” and “intention.”

So actually, the man was saying, “If it serves your greatest purpose, I know you can heal me. If you, in your wisdom and master intentions, see a purpose in healing me, please do it.”

It wasn’t about “want to.” Jesus may very well want to give or heal or say yes, the same way—but to a far greater measure—that I will always want to give extravagantly to the people I love. I would love to say yes to my children every time they ask, but all those “yesses” would not produce people of character, diligence, perseverance, and patience. Parenting is one long marathon of acting toward and according to a greater purpose. On a much grander and important scale, I can trust that God’s no is according to his greater purpose, even if he’s the one only who knows exactly how that no fits into his plan.

What could those purposes be? Maybe we do not get what we ask for because there is greater beauty in how we love each other when we don’t get what we want. After all, anybody can be nice in a season of constant yes. Maybe Jesus wants to show his intimacy in the valley of what we do not have here, so when we meet him at last, finally face-to-face, we will know the one we’ve been talking to all these years.

I’ll be honest. It feels like dangerous territory to even write these words. I feel like I am dancing on a thin tightrope stretched between two extremes: Speaking for God or Offering Empty Platitudes. Both ends of the spectrum, while filled with good intentions, can be terribly painful to the one listening.

Here’s what I know: I trust who God is, even when I’m tired of waiting. I trust who he is, even when I have no idea what he is doing. When I ask for big things, I always believe he can, but I often wonder if he will. These two statements can live together in the same sentence. They can be sisters in the same house. One does not negate the other. I am allowed to do both.

Take heart, dear friend. Don’t lose your courage. Don’t give up. Don’t stop asking for the desire of your heart. Come as close as the leper came. Ask with the humility he showed. And ask the Lord to open your eyes and your mind to the greater purposes in his answer.

Stay in it. Keep asking. There will come a day when all the waiting will make sense, even if it’s not now, not in this lifetime, and not on this side of heaven. You and I will realize that these names and needs we kept presenting were never out of his sight or out of his hands. We will see what we couldn’t see.

And at one of those dinner parties in heaven, I hope for a seat at the table reserved for the persistent widows. 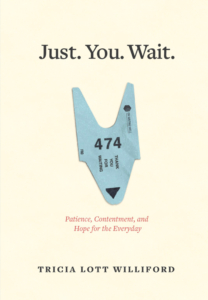